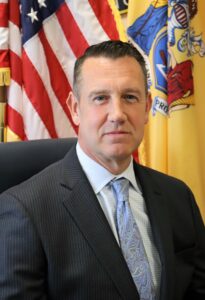 Chief of Detectives Patrick J. Thornton Began his law enforcement career as a patrol officer with the Eastampton Police Department, and later served in the same capacity with the Burlington Township Police Department. In 1995, he enlisted in the New Jersey State Police, where he rose to the rank of Captain.  During his State Police career, he served as a road Trooper in Troop A, Troop C and Troop D before joining the Investigations Branch. During his career, he served at the New Jersey State Police Academy and the Office of Professional Standards before being called upon to work in the Superintendent’s Office.  He concluded his career in the role of Executive Officer in the Investigation Branch.

September 11, 2001: Assigned to the New Jersey State Police investigative efforts for the terrorist attacks on the United States. Worked cooperatively with local, state, and federal agencies.

Co-Chaired Background Investigation Review Committee (BIRC): Served as the Co-Chair along with a member of the Office of the Attorney General to oversee the New Jersey State Police Selection Process.

Assigned to Super Bowl 48 (2014) Office of the Chief of Staff: Served as the liaison for the Office of the Superintendent for Super Bowl 48 Executive Level planning and coordination of the event and with all outside agencies and organizations. Worked directly with various law enforcement agencies, private sector entities, non-governmental agencies, and the NFL.

Liberty Mid-Atlantic High Intensity Drug Trafficking Area (HIDTA) Executive Board and Intelligence Committee: The Executive Board provides direction and oversight in establishing and achieving the goals for the LMA HIDTA, chooses the Executive Director, and reviews and approves initiative proposals and funding requests.

National Alliance of State Drug Enforcement Agencies (NASDEA): Served as the New Jersey State Police representative to NASDEA. The member agencies are from the nation’s state investigative bureaus and state police agencies with the primary responsibility of conducting criminal investigations involving violations of controlled substance laws. The working members of NASDEA are agency heads and command-level staff. All 50 states and the Commonwealths of Puerto Rico and the Virgin Islands are represented within NASDEA.

Anti-Defamation League Advanced Training School: Attended the Anti-Defamation League Advanced Training School.  Less than a year after September 11, 2001, ADL created a major counter-terrorism training program that is now recognized as one of the premier counter-terrorism trainings in the nation. The seminar provides law enforcement executives and commanders from across the country with the latest information and resources to increase their capabilities in combating domestic and international extremist and terrorist threats.

Hurricane Maria, NJSP Puerto Rico Integrated Deployment Effort (PRIDE) Deployment: Served as the Division’s Investigations & Intelligence Branch Commander during the aftermath of Hurricane Maria. Supervised and coordinated all investigative efforts of a 200-person detail that began in October 2017. In addition, collected, analyzed, and distributed intelligence related to the deployment. Worked directly with local, state and federal agencies, including OEM, FEMA, and the United States Military.

He was sworn in as Chief of Detectives on July 11, 2022. Chief Thornton possesses a Bachelor’s Degree from Rowan University and a Master’s Degree from Seton Hall University. He is a graduate of the FBI National Academy, 256th Session, and maintains an FBI Top Secret clearance.